James talked Melissa into marrying him in 2001. Since then, Caedmon, Noah, and Amelia have rounded out their starting five. James joined the staff team at Christ Point in 2007. He loves preaching the word, walking with and caring for people. If he’s not scratching sermon notes on his dry erase board he’s sipping coffee with a friend asking, “How are you really doing?” When James isn’t at the office he’s at home chasing a soccer ball with his kids or chasing after his wife. 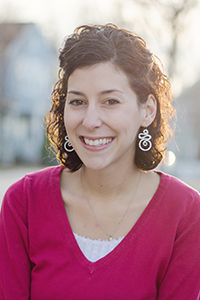 Jodi is from Pittsburgh, Pa and moved to the Charlotte area in 2006. She and her husband Wes have three little girls, Anna, Ruthie, and Phoebe-who all make life much more hilarious each day! Jodi has a passion for teaching BIG things to little people in creative and engaging ways. She loves to teach the gospel to kids and to remind them of how much they are loved by Jesus. Jodi also loves teaching art at Hope Academy, having dance parties with her daughters, drinking large quantities of coffee and going on dates with her husband.